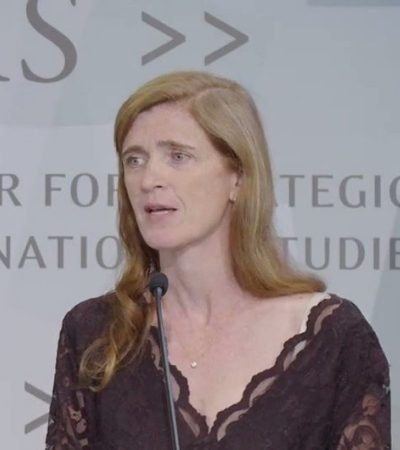 Today, Administrator Samantha Power delivered an address on the growing global food security crisis at the Center for Strategic and International Studies headquarters, co-hosted by the Eleanor Crook Foundation. The Administrator laid out the severity of the current food crisis, particularly in the Horn of Africa, outlined steps the United States is taking to address global hunger and malnutrition, and emphasized the urgent need for additional action to prevent the crisis from getting much worse.

A full transcript and video of her speech, titled “The Line Between Crisis and Catastrophe,” are available here.

Administrator Power detailed three fronts on which the global food crisis must be fought to avert a catastrophe and announced that USAID will provide a nearly $1.3 billion surge of humanitarian and development assistance to the Horn of Africa.

“We must battle together on three fronts, providing immediate humanitarian aid to the severely hungry and malnourished, providing sustained investment in global agriculture that will help farmers boost their harvests, and undertaking concerted diplomacy so that we mobilize more resources from donors, avoid export restrictions that can exacerbate the crisis, and lessen the burden on poor countries.”

“Today, I am announcing here a surge of nearly $1.2 billion in funding that will be dispatched to meet the immediate needs faced by the people of Somalia, Kenya, and Ethiopia. This is on top of the more than $507 million we’ve already given to the Horn response. […] Some of this assistance is going to take the form of food aid – staples like sorghum and split peas, and enriched cooking oil that can help sustain those who lack access to food. But as the global community has long realized, hunger cannot be fought with food alone.”

“But to prevent, not just this catastrophe, but those yet to come, we have to go beyond emergency assistance and make substantial investments in agricultural productivity—and this is the second front in our response.”

“But it turns out also, that many of the steps designed to boost agricultural productivity over time can also prove critical right now. Recognizing this, President Biden and our allies in Congress approved $760 million to expand and scale agricultural programs that can help combat the effects of high food, high fuel, and high fertilizer prices today—$90 million of which, with support from Congress, will be spent in Kenya, Ethiopia, and Somalia.”

She also shared a new $200 million investment in Ready-to-Use-Therapeutic Food (RUTF) by the United States – which constitutes the largest commitment that has ever been made to treat severely malnourished children – and announced that the Eleanor Crook Foundation, the CRI Foundation, the ELMA Relief Foundation, and the philanthropist Sir Chris Hohn will contribute and additional $50 million toward this effort.

“The United States will provide $200 million to UNICEF to maximize the procurement of RUTFs, and distribute them to the areas that most need them, including countries in the Horn of Africa and the Sahel. With this commitment, we will help get this lifesaving care into the mouths of an additional 2.4 million children – the largest leap in coverage on record.

And while this is the most significant commitment that has ever been made to treat severely malnourished children, there is still more that can be done, and there are others who can chip in to help.”

Administrator Power discussed how Putin’s unprovoked war against Ukraine is making this crisis far worse. In addition to the untold suffering Putin is causing to the people of Ukraine, he is also waging a war on the world’s poor, holding food hostage and further spiking food, fertilizer, and fuel prices while taking Ukrainian grain off the market.

“In 2021, a record 193 million people in 53 countries across Africa, the Middle East, Asia, and Latin America, faced at least this third crisis phase of hunger. That number reflected many things – job and income losses and supply chain disruptions from COVID-19, climate shocks, long-simmering conflicts, governments restricting humanitarian access to people in need. But, it didn’t account for the latest accelerant of human misery: Vladimir Putin’s unconscionable assault on Ukraine. We know that last year’s number of people in food crisis could grow now by as many as 40 million people.

Putin’s war has already driven millions of Ukrainians from lives of relative prosperity to destitution and dependence on humanitarian aid. But through his actions, he is also waging a war on the world’s poor, spiking food, fertilizer, and fuel prices while taking Ukrainian grain off the market.”

Administrator Power made the case that while the United States will continue to be a leader in responding to humanitarian crises, our fight against global hunger will not succeed without collective action – unless countries around the world, especially those that are the most well-resourced, do their part.

“The United States has long been the leader in response to humanitarian crises, and we are proud of that leadership and incredibly grateful to Congress and the American people for their compassion and generosity. But the world has always benefited from the generosity of other nations.”

“But these are extraordinary times and they call for extraordinary measures. The generosity marshaled toward the people of Ukraine must also be directed to the less visible victims of Putin’s war—to those bearing the brunt of the cascading effects of his terror. In the United States, we have twice now worked with Congress to obtain emergency funding—over and above our pre-existing approved budgets—to support both Ukrainians and those hit hardest by this global food crisis. We need other countries to look beyond their approved budgets—to address the current gaps in assistance, especially those who might have more space to do so given the returns they are receiving from high commodity prices.”

Source: USAID The below is attributable to Spokesperson Jessica Jennings:‎ Today, Administrator Samantha Power traveled to Des Moines, Iowa in a visit highlighting the U.S. government’s efforts to fight&nbspthe…

Source: USAID Today, Administrator Samantha Power called for an acceleration and expansion of agricultural innovation and investment as a critical pillar of addressing current and future global food crises&nbspand…

Today, in his address to the 77th session of the United Nations General Assembly President Joseph R. Biden, Jr. announced over $2.9 billion in new assistance from the U.S. Government&nbspto…